Five years ago the centrist leader Francois Bayrou was for a short period the most talked-of personality in French politics. Coming from nowhere in the polls, he enjoyed an unexpected rush of support in the three months leading to the April 2007 presidential election. Suddenly he was at the centre of a media storm. Journalists flocked to his Pyrenean farm and wrote excitable articles about a “three-horse race” for the Elysee. It helped (for the photographers) that the candidate raised thoroughbreds in his spare time.

In the end it came to nothing. Francois Bayrou was third behind Nicolas Sarkozy and Segolene Royal, failing to qualify for the all-important round two. But his score was a scarcely-believable 18.6%. Some 6.8 million people wanted him to be head of state. It was the high point of Francois Bayrou’s career – and a moment that surely inspires him today as he embarks on another presidential bid.

Because once again – as in 2007 – he is moving rapidly upwards in the polls. From 5 or 6% two months ago, he is now given 13 or 14%. In mid-January, one survey (Ipsos in Le Point magazine) declared him France’s most popular political leader. The question is – can he do it again? Or rather, can he do it again, but better? And this time actually make it to the Elysee?

By a mixture of willpower and good fortune, Mr Bayrou has over the last decade established himself as a fixture in French politics. The willpower comes from a self-belief that his friends call inspirational, and his enemies egotistical.

The fortune comes because the French centre is a large and long-established – if amorphous – political force. And right now no-one else can claim to lead it. Christian Democrat; liberal in economics but with a social conscience; anti-Gaullist and fervently pro-European: the centre is Mr Bayrou’s natural political home.

He was born in 1951 to a prosperous farming family in the Bearn – a small region of the Pyrenees next to the Basque country. The Bearn is where France’s best-loved king Henri IV (ruled 1589-1610) came from, and Mr Bayrou once made a lot of money from a biography of the monarch. Indeed his provincial origins are one of his strongest selling-points. He speaks the local dialect – Bearnais – and can pose with some legitimacy as a counterweight to the powerful of Paris.

As a child Mr Bayrou famously overcame a stutter. He qualified as a teacher of Latin and Greek, but helped his mother on the farm when his father died in an accident.

He married young and has six children. He is a practising Roman Catholic, and on trips round France asks staff to identify the nearest church. 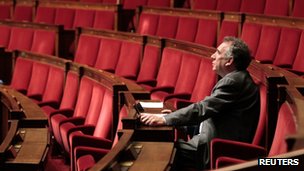 He was first elected to the National Assembly in 1986, as a member of the now-defunct UDF party for his home region. He still holds the seat today.  Mr Bayrou also served as a member of the European parliament. More importantly, for four years from 1993 he was minister of education under prime ministers Edouard Balladur and Alain Juppe.

And all this time, Mr Bayrou was also manoeuvring himself upwards through the confusing world of French centrist politics. Founded originally to promote Valery Giscard D’Estaing’s political ambitions, the UDF – L’Union pour la Democratie Francaise – was in fact a coalition of a myriad tiny formations (PR, DL, CDS, CPR, PPDF, PSD etc etc etc). Mr Bayrou became president of one these formations (CDS), and from there took over the UDF itself in 1998.

In 2002 he had his first shot at the presidency, winning a disppointing 6.8%. Five years later he had his breakthrough.

If Mr Bayrou is expecting another breakthough in 2012, there are reasons to be optimistic. Even more than in 2007, circumstances today favour the outsider. Nicolas Sarkozy is the unpopular president of a country about to enter recession. His promises of improving the lot of working people have come to nothing.

But the public is not particularly enamoured either of the official opposition, the Socialists (PS), and their candidate Francois Hollande. Many lump the PS and Sarkozy’s UMP party together as the “establishment” – and wish a curse on both their houses. Alternatives such as Francois Bayrou and the National Front leader Marine Le Pen have thus taken on a new credibility. Marine Le Pen, who is several points ahead of Mr Bayrou in the opinion polls, comes from a very different political family. But in a sense they are rivals for the same title of “people’s champion.”  While Marine Le Pen appeals to the impoverished working-class, Francois Bayrou stresses his rural roots.

Both urge a “buy French” campaign to save domestic industry, both decry corruption among the elite, and both use the same acronym – UMPS – to describe the ruling duopoly.  “I love the people. I come from the people. I grew up in a village of workers and peasants,” Mr Bayrou said in a recent interview. “Those who use the word ‘people’ as an insult understand nothing of France.”

His outsider status is a little unconvincing when one thinks of his own record as coalition partner with the Gaullists. But on one point, Mr Bayrou can genuinely claim to have led the way. Long before it became fashionable, he was warning about France’s worrying financial deficit. At the 2007 election he promised a constitutional change to ensure balanced budgets.  That these are now commonplace themes gives him a very strong hand.

Why for example, during the 2007 campaign, did Simone Veil – a concentration camp survivor, politician and one of the most respected public figures in France – say this of him?

“He is a schemer and an opportunist … convinced he has been touched by the hand of God and is pre-destined to be the president – not just a traitor, but a crank to boot.”

And why, when one looks back at Mr Bayrou’s career, is the overriding impression an endless flow of former allies bidding him “au revoir”?

Back in the mid-80s when he first entered parliament, there were 214 UDF members of the National Assembly. Today, in his newly-formed Modem party, there are two – himself and a neighbour from Bearn.

After he lost his first presidential race in 2002, half of his supporters defected to join the new UMP. When he lost in 2007, most of the rest set up a rival formation, the Nouveau Centre, and backed President Sarkozy. The fact is that Mr Bayrou has the power to alienate many of those who might otherwise support him.

They feel he is touched by a certain megalomania, with an almost messianic sense of destiny. And they dislike the way his political world revolves exclusively round these periodic bids for the presidency. A hard-hearted critic would note that it is only at presidential elections that Francois Bayrou can really come into his own. This is because the main candidates of left and right invariably appeal to their outer fringes ahead of round one, and this leaves a gaping hole in the centre – which the centrist happily fills.

It happened in 2007, but after round one Mr Bayrou sank without trace. He then spent five years in the wilderness before re-emerging once again two months ago as providential middle-of-the-roader. For many he suffers from a permanent case of the “Poulidor” syndrome – after the French cyclist Raymond Poulidor who never quite made it to the top of the podium.

But just possibly, things are different in 2012. Because, for the first time in modern French politics, this election looks like it could be a four-horse race: Mr Sarkozy, Mr Hollande, Ms Le Pen and Mr Bayrou. If all four candidates begin to even up in the polls, then just a tiny shift in voting intentions could alter everything. A Bayrou in round two is therefore not inconceivable. And against Ms Le Pen or Mr Sarkozy, he would probably win.

A British look at François Hollande

A British look at Nicolas Sarkozy