François Hollande, the French Socialist candidate in the next presidential election, is an experienced political organiser who has, nonetheless, never held national government office. He is regarded by many as an affable moderate whose quiet – some might say dull – manner contrasts as sharply with the intensity and glamour of conservative President Nicolas Sarkozy as the two men’s economic policies.

However, the modest image of this man who rides to work on a scooter conceals, his supporters would argue, a steely determination to lead his country. To take the party ticket in 2012, he had to prevail in a gruelling primary election which put both his political and private life to the test. One of the more dramatic moments of that contest came when fellow contender Segolene Royal – his estranged partner of nearly three decades and mother of his four children – publicly endorsed his bid.

Mr Hollande was born the son of a doctor on 12 August 1954 in the north-western city of Rouen. He attended the ENA administration school, where he met Ms Royal, and another elite institution, Sciences Po.  Having been active in student politics, he joined the Socialist party in 1979 and played a junior role as an economic adviser in the Mitterrand presidency.

An MP since 1988, he represents a constituency in the south central region of Correze. He succeeded Lionel Jospin as party leader in 1997, a post he retained for more than a decade. In 2008, amid acrimony over the defeat of Ms Royal to Mr Sarkozy at the previous year’s presidential election, he stood down. It later emerged he had been having an affair with journalist Valerie Trierweiler, his current partner.

The friction between Mr Hollande and Ms Hollande long embarrassed the party but in May 2011 a scandal of a different magnitude threatened to engulf it, when new favourite Dominique Strauss-Kahn was arrested in New York on attempted rape charges, later dropped. In the ensuing months, many began to see Mr Hollande as the best available bet for 2012. 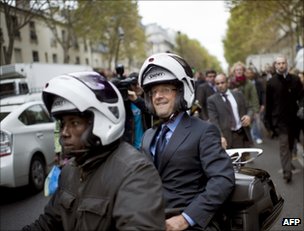 Some proof of his wider appeal is that he enjoys the unlikely honour of having been praised by former conservative President Jacques Chirac.

Mr Chirac described him in his recent memoirs as a “true statesman” capable of crossing party lines. The remark was perceived by some as a slight on Mr Sarkozy, whom Mr Chirac openly mocked in his book.

However, Mr Hollande is generally viewed as a moderate.  “I don’t want a hard left,” he said in the last primary debate, facing challenger Martine Aubry. “We’re just coming out of five years of a brutal presidency. Should we have a divisive candidacy? I don’t want that. We need a solid left.”  Mr Sarkozy’s camp are likely to focus on the Socialist candidate’s faith in growth and spending as answers to France’s economic crisis.

His proposal to recruit 60,000 new teachers, for instance, was described as “crazy” by the head of Mr Sarkozy’s UMP party, Jean-Francois Cope.  Another, less tangible political danger for Mr Hollande is that he is perceived by some to be too “normal”, lacking the panache of past French leaders.

“When you want to stand for president of the republic, you have to give it that little bit extra,” is how Ms Aubry put it.

A British look at François Bayrou

A British look at Nicolas Sarkozy