On 15 February he launched his campaign for re-election, but faces an uphill battle to beat Socialist candidate Francois Hollande, who has a clear lead in opinion polls. He also faces a strong conservative challenger – Marine Le Pen of the National Front – in the April-May election. Speaking on primetime television, Mr Sarkozy described himself as “the captain of a boat in the heart of a storm”. The scale of the global economic crisis meant that “not seeking a new mandate from the French people would be abandoning my duties”, he said.

He has the support of Germany’s Chancellor Angela Merkel, with whom he has steered a far-reaching reform of EU budget policy in response to the eurozone debt crisis. He is no stranger to unpopular policies, having pushed through pension reforms in 2010 despite mass protests and strikes. He raised the retirement age from 60 to 62, while unemployment remained stubbornly high.

It is a far cry from May 2007, when he took power after a convincing election victory, and the media was more interested in his private life than the issues facing the country.

In October 2007, he divorced his second wife, Cecilia Ciganer-Albeniz, and after intense speculation married model-turned-singer Carla Bruni in early 2008.

The publicity surrounding the romance between Mr Sarkozy, 57, and Ms Bruni, 44, was a departure from the French tradition of keeping presidential private lives private.

In October 2011 Ms Bruni gave birth to a baby girl, Giulia. Her pregnancy was kept well away from the media glare, more in the traditionally monarchical style of the French presidency.  Mr Sarkozy also has one son from his marriage to Ms Ciganer-Albeniz and two sons from his first marriage, which ended in divorce in the 1990s.

It was as a highly combative interior minister and leader of the ruling UMP that Mr Sarkozy made his name in national politics. He sharply divided opinion in France – not least by adopting a tough stance on immigration.

He famously described young delinquents in the Paris suburbs as “racaille”, meaning rabble. 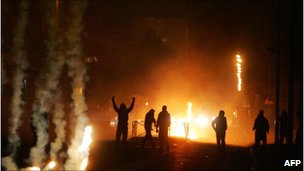 France has seen mass protests in recent years, some ending in violence

That blunt comment – made before the 2005 riots – encouraged some critics to put him in the same category as far-right leader Jean-Marie Le Pen.

As president he has pushed through measures to curb illegal immigration – including highly controversial mass deportations of Roma (Gypsies). But he has also advocated positive discrimination to help reduce youth unemployment – a challenge to those wedded to the French idea of equality. His call for state help for Muslims to build mosques was also controversial. The French media have dubbed him the “hyper-president” because of his hyperactive leadership style, and also the “bling-bling president” because of his taste for Rolex watches and holidays on luxury yachts.

Unlike most of the French ruling class, Mr Sarkozy did not go to the Ecole Nationale d’Administration, but trained as a lawyer. The son of a Hungarian immigrant and a French mother of Greek-Jewish origin, he was baptised a Roman Catholic and grew up in Paris. He has called for “a rupture with a certain style of politics”, saying he wants to encourage social mobility, better schools and cuts in public sector staff.

One of his main political influences is not French but British, according to one of his biographers, Nicolas Domenach. “He admires Tony Blair hugely – for many reasons,” says Mr Domenach. “Sarkozy looks at how Tony Blair was able to sell his political ideology.”

On the international stage Mr Sarkozy is often described as an Atlanticist, though he was also against the war in Iraq. In March 2011, France was first to send warplanes into action against Col Muammar Gaddafi’s forces in Libya, spearheading the foreign intervention that enabled the Libyan rebels to succeed. He had earlier brokered an end to the August 2008 conflict between Russia and Georgia, and his performance while holding the six-month EU rotating presidency was also assertive.

Rise through the ranks

Before serving as interior minister and finance minister under President Jacques Chirac, Mr Sarkozy served as mayor of the affluent Paris suburb of Neuilly from 1983 to 2002.

“He’s hyperactive, he’s ambitious, he’s a heavy worker, a workaholic, he never rests,” says Anita Hausser, another Sarkozy biographer.  Ms Hausser says his appeal is simple. “He was a lawyer, so he seems close to the people, and he wants to show them that he understands their problems and that he will solve their problems,” she says.

Initially a protege of Mr Chirac, the two fell out dramatically when Mr Sarkozy backed a Chirac rival for the presidency in 1995 – a slight that has never been forgotten. Even those on the left in France admit Mr Sarkozy is a formidable political force. He has shown strong protectionist instincts – pouring state funds into saving the ailing French company Alstom. As the economic downturn deepened, Mr Sarkozy struck a protectionist note in suggesting that French carmakers should put French jobs first. He has also been vociferous in demanding tougher regulations for hedge funds and tax havens.